Hi all, SusieQT here from Practice in Time!

Well, it finally happened to me- the dreaded Pyrex drought. I went a couple of weeks without finding anything- there wasn't even a bit of Pyrex in my regular thrift store rotation. So I had to do something drastic. (OK, yes, I bought some more on eBay, but that's a post for another day!)

I actually took a whole day off and went to some thrift stores farther away that I hardly ever have time to get to. And boy, was it worth it!

We have a Habitat for Humanity ReStore near us, but it is only open Wed-Sat. It's kind of tough to get over there on those days, and I've been meaning to go there for months. I have found Pyrex there in the past, and this time I had high hopes. But this time it didn't pan out as I had hoped. I did find some other things (more on that in a sec), but the only Pyrex in the place was this lone Butterfly Gold mug. This is not a pattern I collect, but I love Pyrex mugs, and I was desperate, so I bought it. 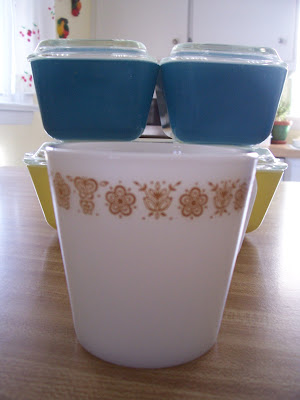 Obviously, one mug is not enough to quench my Pyrex thirst, so I figured I'd run across town to another giant thrift store I hardly ever get to. This store is in an old warehouse, and is packed. It is also a little on the high side, price-wise. At first glance, it was a bit overwhelming, but eventually I got my bearings and got my nose on the Pyrex. 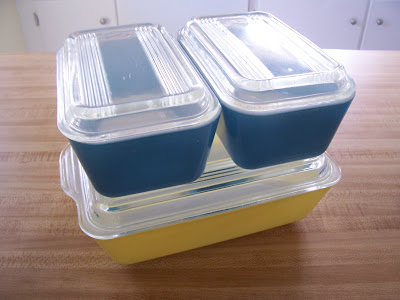 The first thing I found was the yellow 503. Now we're talking- I collect Primary, and even though I do already have this one, no way was I leaving it. Then I ran into an old friend of mine, and while we were talking I spotted the two blue 502s. I don't think she minded that I practically turned my back on her to grab these quick!

I needed one of the blue ones to almost complete my first Primary fridge set- I only need one more red 501- and finding two was a bonus! It wasn't until I was back in the car on the way home that I realized with the two yellow and two blue ones, now I only need 3 red 501s to have two complete sets! Believe me, I searched that store high and low for the red ones, but they were nowhere to be found. Well, they're out there somewhere and I will find them sooner or later, that is, if I don't break down and buy them on eBay (no, bad! bad!) Like I said, this store is a bit high on prices- the yellow was $8 and each blue was $6. They do have the old style lids and are in great shape except for a couple of nicks to the corners of the lids.

OK, well, that's the end of the Pyrex, but if you want to stick around I'll show you what else I found at the ReStore. These are tangentially Pyrex-related, so it kind of counts, right? 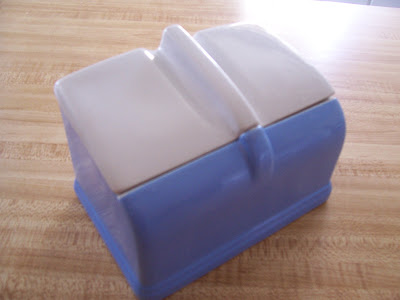 This is like a fridgie from the 1930s, pre-Pyrex. It is a refrigerator dish made by Hall China and is marked on the bottom "Coldspot Refrigerator Dish". It was pretty neat, and only $2. 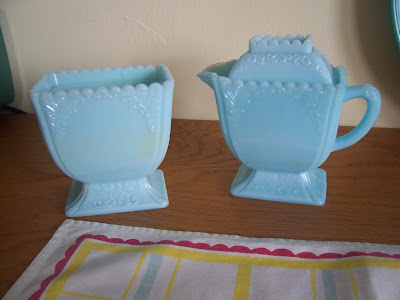 These I bought after learning about Pyrex delphite. I knew they weren't Pyrex, but I have never seen delphite in person before, so they had to come home with me. I collect jadeite, and really never even heard about delphite until I started collecting Pyrex. They are so pretty, I hope to find more! If anyone knows about the pattern or maker of these, I'd love to hear it, because in the little research I've been able to do, I've come up empty (they are not Jeannette Cherry Blossom- that I do know). They are unmarked on the bottom, except for the numbers 1,2, and 3 (presumably for the pieces in the set.)

The best part was that they were only $4 and since I was wearing a red shirt, I got 20% off for their Valentines day sale. Score!