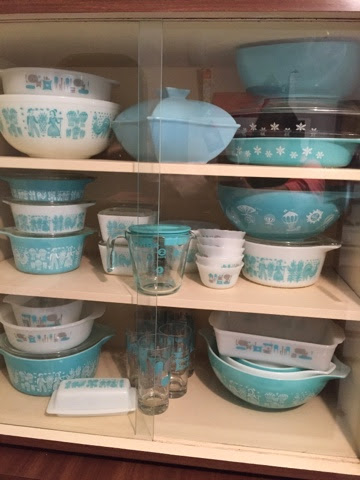 Hey guys I'm back! Been a long time things have changed in my life for the better and haven't had the time to go back to blogger (shame on me!) 😊 anyways I wanted to share my Halloween Pyrex display in my beautiful mid century hutch! Enjoy! 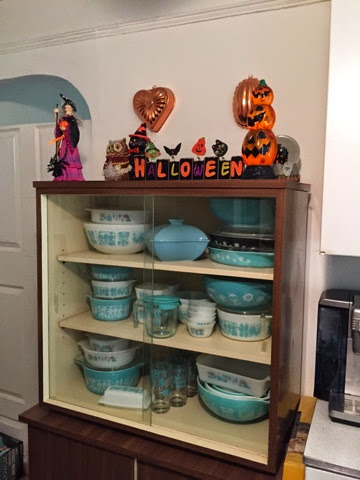 I recently scored a full set of 1950s aqua Geneva metal cabinets. I recently installed the pantry portion and filled in with all my favorite Pyrex pieces. The story about how I found and took home this amazing cabinet set can be enjoyed at cherrypickedfinds.blogspot.com Enjoy your week and keep Pickin! 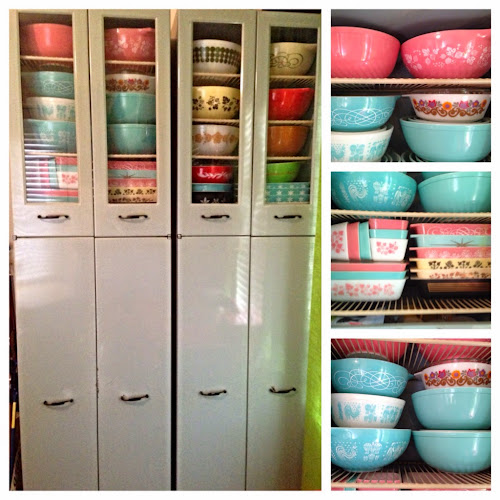 Posted with Blogsy
Posted by CherryPicked at 9:24 AM 1 comment:

I am one of those crazy Pyrex people that actually uses my whole collection daily.  I swear that there is something so totally awesome about vintage Pyrex and I am not talking about just colors and designs.  Vintage Pyrex is the best to bake in!  My niece and nephew were coming over for dinner so I quickly whipped up a square, double layer cake in my pink bakers....both I found at garage sales for .50 cents a piece, summers apart.  The pink Gooseberry was a Goodwill find and it was around $3.99 I believe. 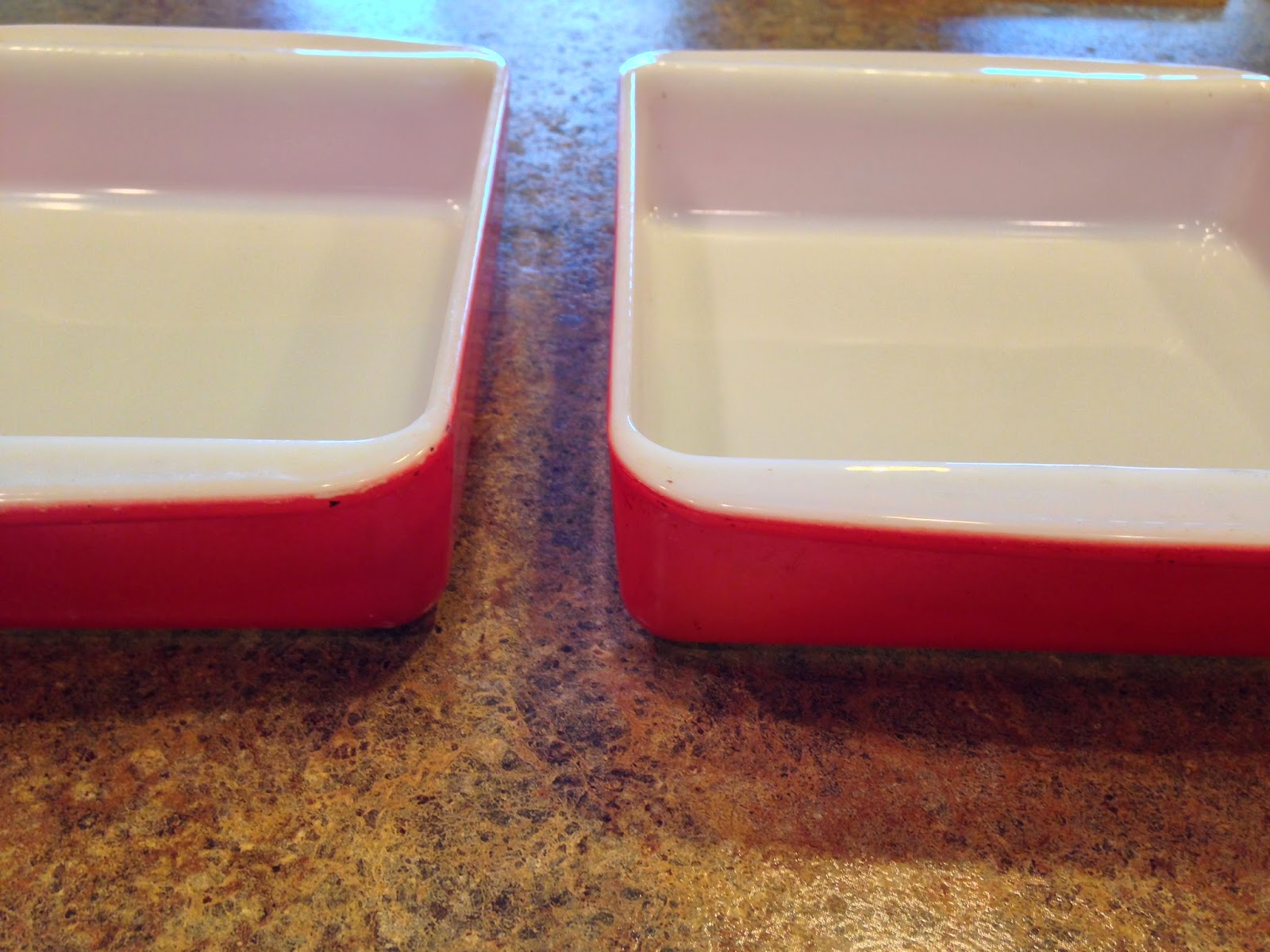 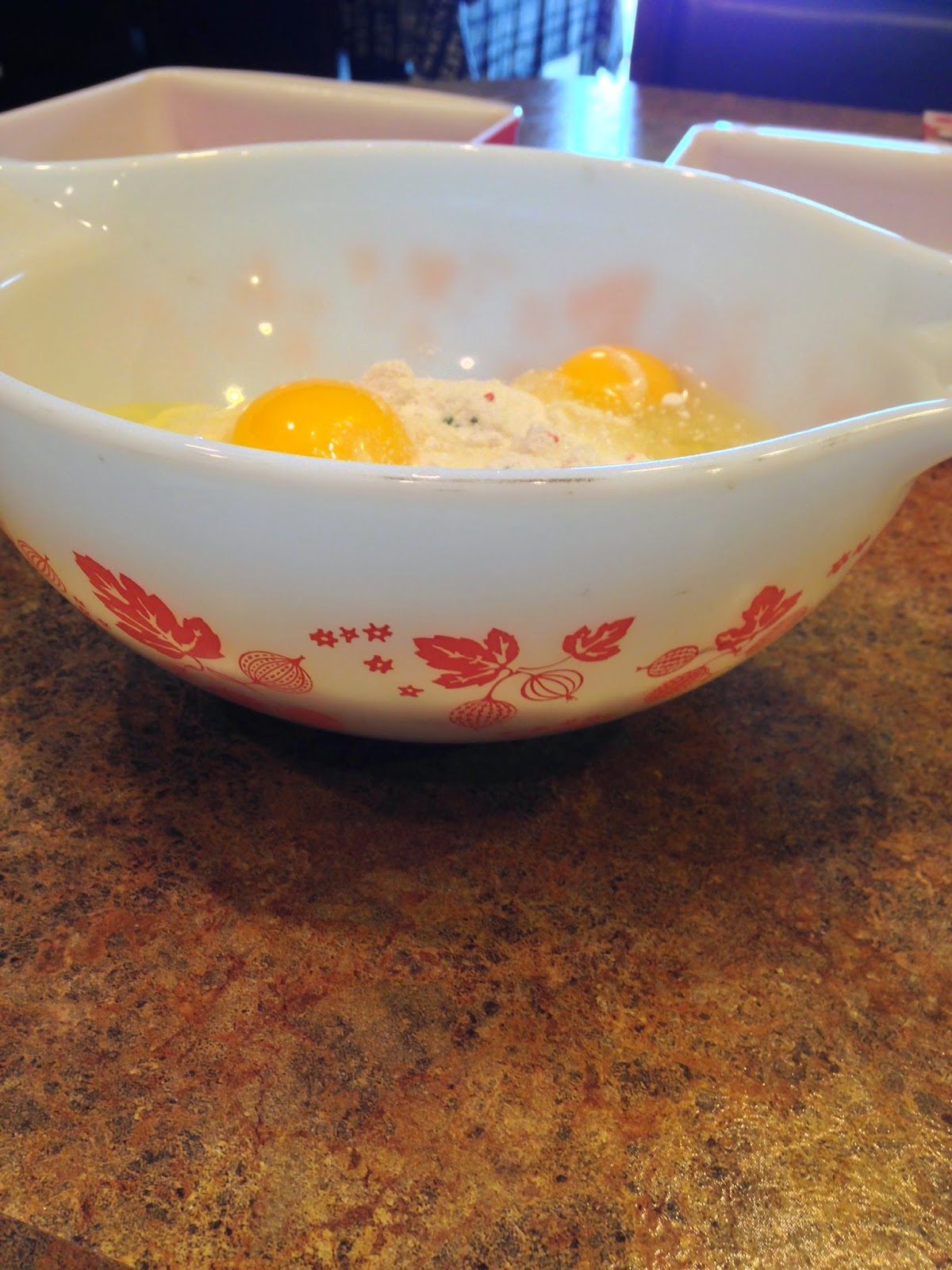 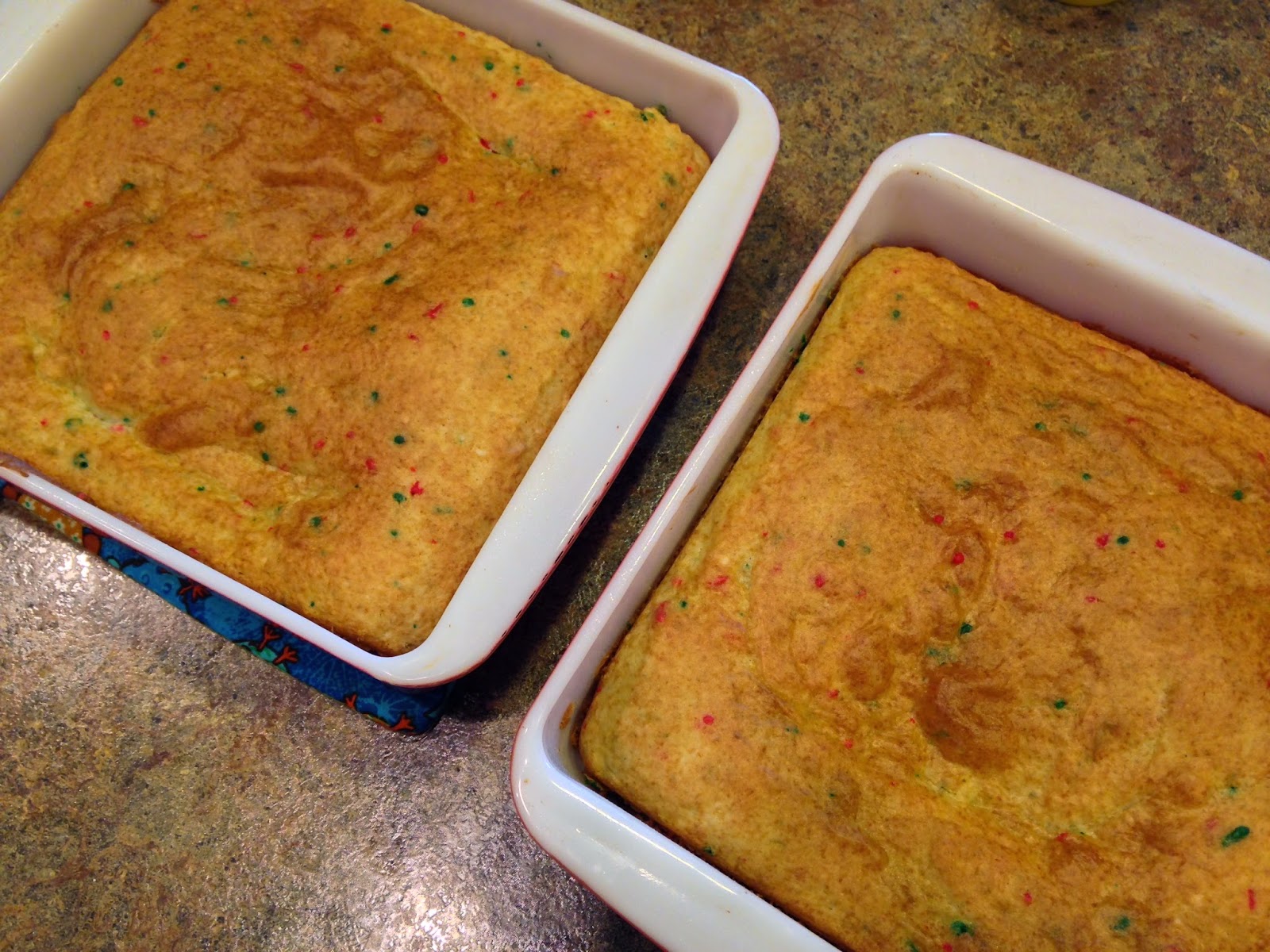 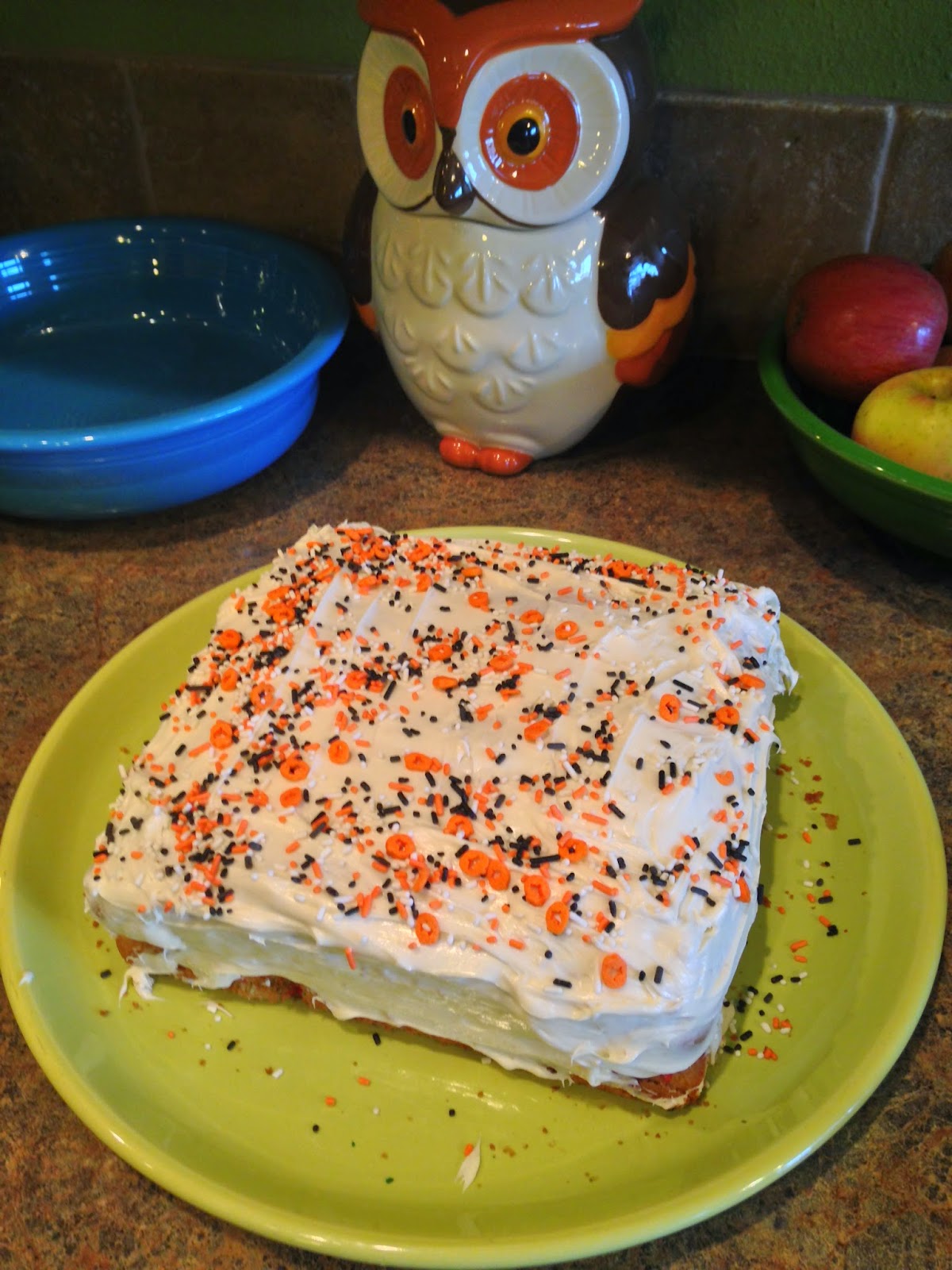 The large green platter was a thrift store find of .50 cents and is made by "Brusche of California" which was a man who designed both for himself and for Bauer ware...Most collectors of Bauer and other mid-century pottery know the story of John Herbert Brutsche. During his time at Bauer he tried to convince management to produce new lines of pottery that were more modern like the pieces being designed by Russel Wright. When this effort was unsuccessful he established Brusche (he dropped the "t") Ceramics in Whittier, California in 1948. By 1950 his line was merged with Bauer, so true Brusche pottery was only produced for a very short time.  They state :Brusche California USA" on the bottom."  I found two, matching large green platters on the same day, in the same thrift store.  Each was .50 cents.  They go for a ton on eBay!  I bought these years back, not knowing the story or their worth.  I just loved Chartreuse green and pottery platters.  I've often wondered what kind of housewife had these two platters back in the day?  They are rather large and maybe she did a lot of hosting parties?  :)

I made a quick run through a local antique mall this weekend. I was going to skip one aisle that never has anything good but my spidey sense told me to take a peek. As I was turning around to exit that aisle, what did I spy from the corner of my eye... 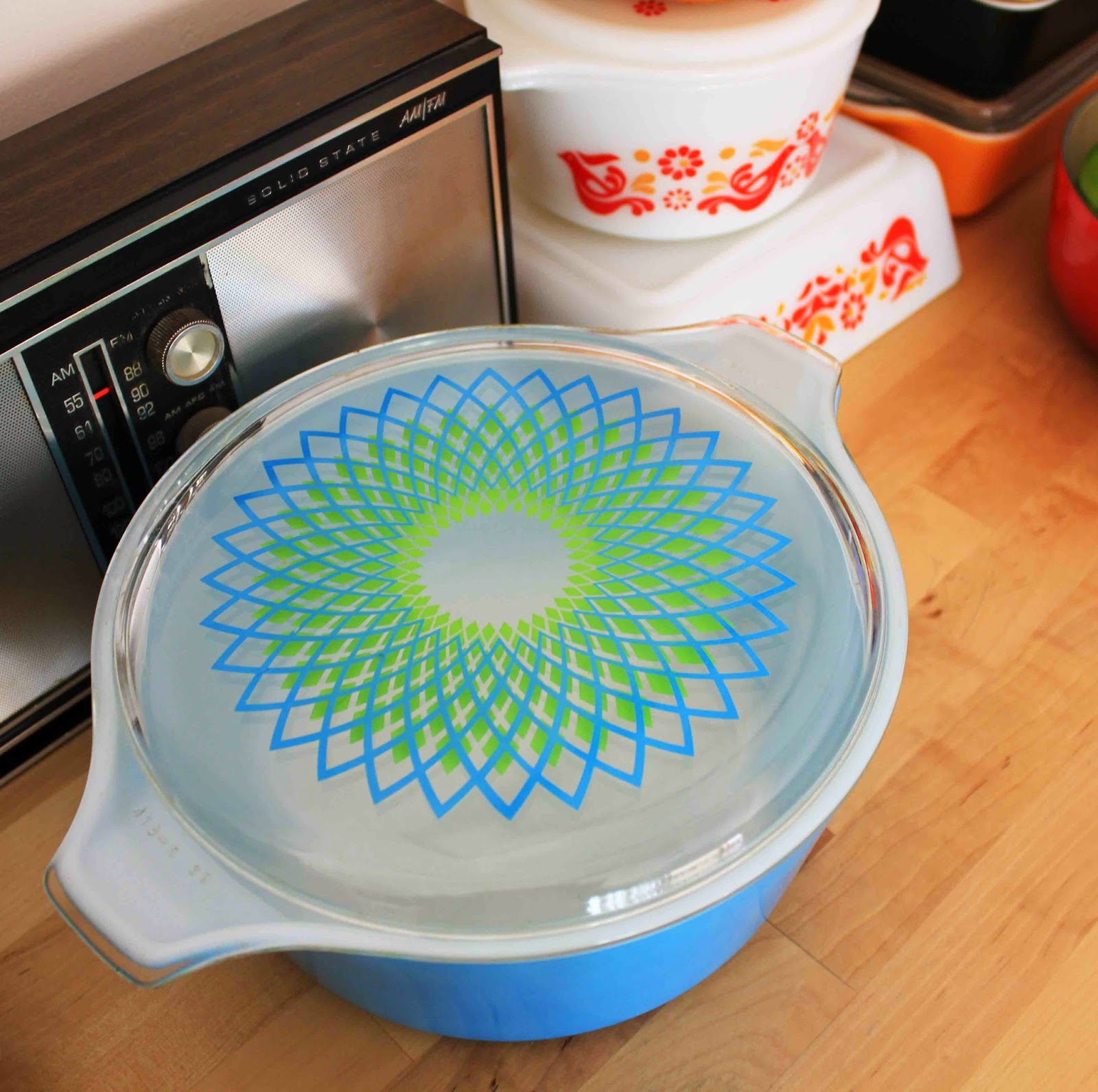 I was pretty excited, I think I said "Oh my" a few times. All I had glimpsed was the lid but that was enough. The dish and the lid are in perfect shape, no scratches, chips, or any other flaws. And the next part? It was $15. When I saw the price I said something a bit stronger than "Oh my"!

P.S.: Now that I have the fancy-schmany iPhone 6 and a lot more storage space than my abused 5 I have done nothing but take pictures (I had run out of space on my old phone) and as a result, joined Instagram. You can find me at Jacquelynedinaz.
Posted by jacquelyn at 1:58 PM 2 comments: