Ever since I moved further south, Pyrex seems to be in short supply. I picked up three Spring Blossom items (you can see the first one here), but apart from that bowl, another smaller one, and a fridge dish without a lid, I haven't even seen much of anything.

I'm not sure if I'm simply not finding the right stores or if the Pyrex popularity means more people are finding it before me. Whenever I do see it, the prices elude my budget.

Last week, I went back to Pennsylvania for Thanksgiving and besides the prospect of Pumkpin Pie, I was most excited about thrifting for Pyrex.

The thrift stores however yielded nothing more than a Butterfly Gold mug, so I scoped out a few antique stores instead. I returned to the same store where I first spotted the Starbust. I noticed the vendor had 30% off of everything, so I considered nabbing the space saver myself, but alas, it looks like someone else got there first. I'm glad it finally went to a Pyrex loving home.

At another nearby store, I lamented to a friend that I kept finding entire sets of Butterprint cinderella bowls on sale, but I only needed the small 441. As soon as I the words were out of my mouth, I turned around and saw THIS: 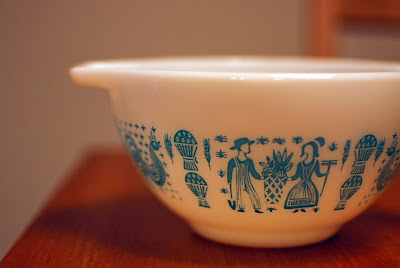 Of course it came home with me to complete the set. 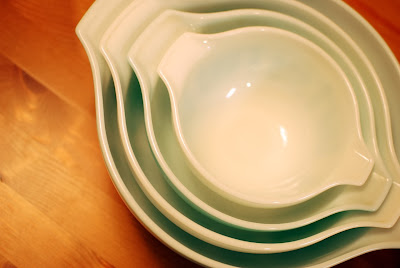 And while last year I probably wouldn't have shelled out $5 for such a small bowl, I justified it thinking that I couldn't even get one on eBay that cheap to complete the collection.

I also spent a day in Adamstown, and hit the jackpot. While there were no turquoise plates to be found, I found a bunch of the pinkish/salmon colored ones on sale. I had already found two dinner plates earlier in the week for only $4. After the Adamstown antique blitz, I had a total of five dinner plates, five salad plates, two dessert plates, a cup and a saucer (all from different vendors) for under $20 for everything. I've actually seen a few of these where I live and I considered collecting them (they go really well with the turquoise ones!), but I didn't want to pay $9 a plate. I couldn't believe my luck in Adamstown finding so many so cheap. One store had 20% off of everything and another one had the same discount on anything over $10.

I also found a Gooseberry 474-B for only a few dollars, since there is a small chip on the bottom. I love how it matches the plates. 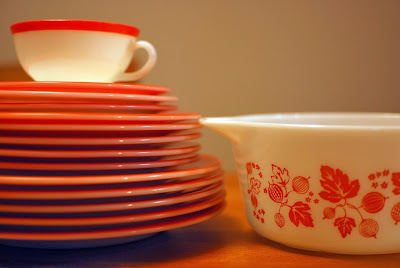 And finally, while there was nary a tiny yellow hostess cup to be found, I did score the larger bowl and four of the serving dishes for only $16. 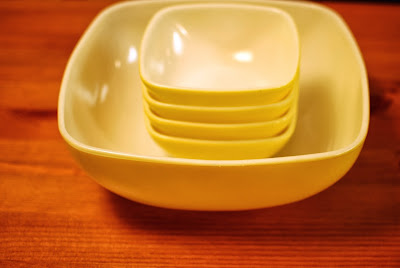 How could I pass that up?! Even though they are different sizes, the set still looks great with my other two bowls. 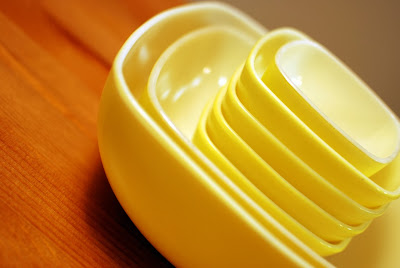 I know the prices were higher than any Pyrex I may have found in the thrift stores (then again, these days Pyrex is crazy high there too!), but these were all pieces I was on the hunt for, so I decided to splurge a bit. Plus I figured that I might not find these same things back home where I live. I still think I got a bargain. Happy holidays to me... my Pyrex wish list is pretty complete!

What pieces are you willing to make a budget exception for?

Hope everyone is enjoying the holiday season (with Pyrex-in-Action, of course).

Posted by Brenda Steffen at 9:40 AM