Going All Out then Reining Back In: Confession Time

I haven't blogged here in a while, so I thought it was time I made a contribution again. I have been collecting pyrex for several years now. I feel very, very lucky to have started when I did. The recent price inflation, onslaught of new collectors, attention for dedicated resellers, and trendiness of vintage in general have made Pyrex a very expensive habit. I do wish I could go back in time and buy a few pieces that I am on the hunt for now. At the time, I told myself prices were too high, that they were bound to come down. Boy, was I wrong.

So, here it is...what I would like to finish things off (and yes, some of these pieces are Glasbake and Fire King). 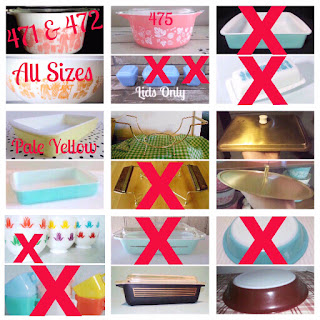 See? Crazy, I know. But having a simple visual reference has really helped to keep me focused. And it feels so good to finally check things off. When I finally got a Starburst after years of hunting and refusing to buy online, it was so satisfying.

I will consider myself "done" with U.S. Pyrex once I have these pieces. That doesn't mean I will stop looking for pieces to add to my collection; these are just the pieces I really want to round it out. I would never turn down Barcodes or more bakeware. And, because I am often a glutton for punishment, I have already started in on my JAJ and Agee collection; I have a few select pieces I would like to get and am sadly aware of just how much it is likely to cost to have them show up at my doorstep.

But reaching this point in my collecting has allowed me to reflect some. I had some foresight in that from the very beginning I kept track of every piece I brought home: what I paid and where I got it; if I traded it, and if so, for what and to whom; if I sold it, and if so, to whom and for how much. It's a bit compulsive but also very eye-opening. For example, I have run across enough Butterfly Gold to last me a lifetime. I have found enough Butterprint refrigerator dishes to build more than a handful of sets. And, in all my years of hunting, I have found Friendship in all shapes and sizes is very, very scarce in my area.

In the very beginning of my collecting I, like a lot of new collectors, started out with a huge wish list and buying every piece I came across. Then I started to panic, like most do, at where all this Pyrex around my house came from. So I started trading and sometimes selling, yet I still brought more in. Then I realized I really needed to focus. So I underwent several large purges. All the while I was still trying to figure out my collecting direction, and still bringing things home.

Over time, I have decided I have to use the piece, not just display it. And I mean it when I say I have to use it...I bake enchiladas in my Starburst and use my Blowing Leaves for leftovers. That meant I really, really had to narrow down my scope. I just don't have a lot of space so I have to be picky.

I am still working on letting go a large chunk of my collection. I have over 250 pieces just hanging around the house. I don't need it all, and I have slated about half of it to go. Complicating matters is my daughter's collection (which is part of that 250 pieces); she collects Pink Gooseberry and has everything but the 475. She's nine and has made it clear I am not to rehome her pieces.

As if having over 250 pieces is not a large enough confession, how about this: I have rehomed via trades or sales over 450 pieces. That is truly mind boggling. Obviously when I first started I was very lucky to find Pyrex seemingly everywhere!

What I have learned is I really enjoy the hunt. Sure, the hunt has become a lot harder over the last year or so. But it is still such a thrill to find that highly-coveted piece at a great price. So I continue the hunt, but over the last year have left more and more behind. And that also feels good, because I really hope that those pieces end up going home with a collector who will love them.

Thanks for listening to me ramble a bit! I wish all collectors much luck in finding their most-wanted pieces.

Jacquelyn
Posted by jacquelyn at 4:16 PM